When Juliana enrolled in the MBA/MPA MIT Sloan/Harvard Kennedy School program, she didn’t plan on studying sustainability. But after she took her first sustainability course at MIT Sloan, she had a realization—sustainability aligns with everything she cares about.

“I've always been involved in lots of causes,” Juliana says, “but the environment was one I didn't get passionate about until graduate school, when it really sunk in that all these things I cared about—animals, human rights, economic empowerment, women's rights, refugees—didn't matter if we didn't get climate change under control. It really struck me how the environment impacts all other issues, so to work in sustainability was a way to impact all of these other things I’ve always been so passionate about.”

I loved MIT's motto—mind and hand—and its focus on action and implementation beyond the classroom, which Sloan really takes to heart.

Before she even stepped on campus, Juliana couldn’t wait to be part of the MIT community. “I loved MIT's motto—mind and hand—and its focus on action and implementation beyond the classroom, which Sloan really takes to heart.” And as a student, so did Juliana.

In addition to her heavy course load, she was involved in Net Impact, Sloan Entrepreneurs in International Development, Sloan Women in Management, and Africa Business. She was also a Sloan Senate senator, an MIT Impact Investing Initiative fellow, and a Sustainability Initiative Internship award winner…just to name a few.

As an MIT Sloan Social Impact fellow, Juliana interned with the Eastern Congo Initiative, a grant-making organization in the Democratic Republic of Congo (DRC) that works with local communities on economic and social development. It’s not a country where she imagined doing an internship, never mind launching a career, but when her internship boss moved to a new company and asked her to join him, she was inspired to go back.

“I thought ‘what a terrific opportunity. When else am I ever going to have a chance to go to such an interesting country?’ Little did I know I would eventually live there! I thought it was just going to be an amazing summer experience, but it led to a whole new world for me that had me moving halfway around the globe, where I'm now able to have a massive impact on people's lives.” 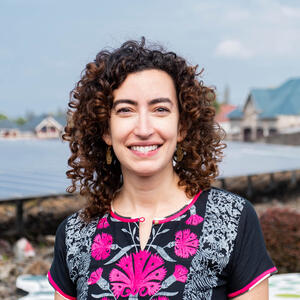 "...it really sunk in that all these things I cared about—animals, human rights, economic empowerment, women's rights, refugees—didn't matter if we didn't get climate change under control."

Less than 20% of the DRC’s 100-million people have access to energy. This energy poverty is one consequence and symptom of Congo's fragility and instability. At the energy company Nuru, Juliana is dedicated to enhancing connectivity in the DRC.  Swahili for ‘light’, Nuru finances, builds, and operates utility-scale, solar-hybrid metrogrids with integrated smart meters and mobile money payment solutions.

In five years, the company has developed the DRC’s first-ever portfolio of solar-hybrid metrogrid assets and an industry-leading pipeline. Nuru deployed Congo's first solar-based mini-grid in 2017 and a 1.3MW solar hybrid site in Goma in 2020, the largest off-grid mini-grid in sub-Saharan Africa. Another ~14MW site is planned for the next two years.

“In Goma, we're operating in Ndosho, which is one of the poorest neighborhoods in the city,” says Juliana. “There, we have over 2,000 clients connected, including small businesses and households, as well as a few anchor clients.”

Juliana started in operations at Nuru and now serves as chief development and sustainability officer, responsible for human resources, ESG, quality control, and special projects. “We're towards the end of setting up our ESMS (Environmental and Social Management System),” she says, “so that's been a large undertaking and especially important for us as a company as we have big expansion plans coming up with new sites opening in 2023 and 2024, for a total of 13.7 new MW.”

“We're also in the process of fine-tuning how we calculate the CO2e displaced thanks to our services,” she adds. “There’s a lot of data collection needed to learn what our clients were using before and how their habits have changed since being connected to Nuru. Our goal is to connect five million people to world-class renewable energy and connectivity services by September 2024, inspiring and catalyzing the incredible human potential in Congo. And how awesome that I get to be a part of that!”

Numbers aside, it’s the people Juliana loves most about Nuru and the DRC. “They’re so welcoming, so warm, so resilient. Everyone I work with is so eager to transform their country. They are a true inspiration and make me look forward to going to work every day.”

And, that’s true for her continued connection to MIT Sloan as well. Juliana still turns to her former classmates as resources when it comes to negotiating salary or managing her company's ESOP or with questions about how to manage a certain situation with an employee. “From the professors to the students, everyone I met was brilliant, curious about the world, and down-to-earth,” she says. “The friends I made and the classmates I met continue to help me learn– and I'm so thankful to be part of such a great and giving community.”