Biogen is a global biotechnology company based in Cambridge, Massachusetts, that is dedicated to advancing medical breakthroughs in neuroscience. In fall 2021, the company engaged students in MIT Sloan’s Healthcare Lab (H-Lab) to promote health equity in underrepresented populations.

H-Lab brought together a diverse team of students for this project: Sloan Fellows MBA students Gaurav Deshpande, a craniofacial surgeon, and Mikael Petrosyan, who has experience in pharmaceutical marketing and strategy; Ana Navarro Lafuente, an MBA candidate with experience in pharmaceutical marketing; and Kerry Xie, a graduate student in MIT Integrated Design & Management with a background in healthcare strategy.

The team also offered a wealth of international experience: members had worked in India, Russia, Spain, and the United States. Cherié Butts, medical director in research & development at Biogen, says the team’s international background helped the company look beyond US equity issues. “The MIT Healthcare Lab project team broadened our thinking around health equity, as they each shared perspectives on groups that are underrepresented in their home countries.”

The H-Lab team began by interviewing stakeholders at Biogen and conducting background research to identify a focal area for the project. “Health inequity is a broad issue that spans the healthcare system, affecting patient experiences across diseases and geography,” says Xie. “For our team, one of the most difficult challenges was right at the beginning, choosing the one disease area, one specific problem, and even one region to focus on.”

The team ultimately zeroed in on decreasing the time to ensure early diagnosis of Alzheimer’s disease in underrepresented populations in Greater Boston. Alzheimer's disease is the most common cause of dementia among older adults, affecting about 6 million Americans. According to the National Institute on Aging, Black Americans are nearly twice as likely as whites to develop Alzheimer’s and related dementias, yet they are less likely to be diagnosed with the disease.

The H-Lab students identified several impediments to diagnosis, including language barriers and mistrust of the medical community, and assessed possible solutions, such as working with advocacy groups to build awareness in target communities. Biogen was already working on some of these solutions, so the students focused on identifying a path forward that the host had not already considered.

“H-Lab students try hard to bring companies a fresh perspective—something that goes beyond what is already being done internally,” says Anne Quaadgras, director of the MIT Sloan Health Systems Initiative and a senior lecturer at MIT Sloan. “In this case that resulted in a lot of enthusiasm from the host.”

In the end, the students recommended a novel tactic to aid diagnosis: educating children about health issues and enabling them to influence their grandparents to assess symptoms and find care with the help of an app. 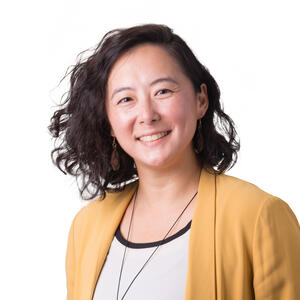 We had a packed house (virtually) for our final presentation, which resulted in a great discussion around recommendations.

“We were really encouraged by the interest we saw from members of the Biogen team,” Xie says.

Butts says the project report was “very well-received.” The company’s senior leadership expressed a commitment to moving forward on the team’s recommendations.

She adds, “It is important to gauge the relevance of our work at Biogen and consider new opportunities that will amplify the impact of what we do. The team from the MIT Healthcare Lab offered the chance to do both!”

Have a business challenge for us? Learn more about hosting an Action Learning team