A Common Thread | Our 2021 Annual Report

Mayor Miro Weinberger of Burlington, VT is modeling how the En-ROADS climate solution simulator—a global model—can be useful to decision-makers at the local level.

I thought the interactive dynamic of En-ROADS was very engaging and it was really unique. I had never experienced anything quite like it.

When Burlington, VT Mayor Miro Weinberger walked into an En-ROADS Climate Workshop this past November, his city had already set an ambitious target: reach Net Zero by 2030. If you chatted with him on the way in, you’d know that he already had some serious climate chops. Still, something remarkable happened when MIT Sloan Professor John Sterman took him and 55 other state and local leaders through the simulation that day. Weinberger left with new insights and a tool that he continues to use at the municipal level in myriad ways.

As part of the 11th Annual New DEAL Leaders Conference, Mayor Weinberger was given the opportunity that all En-ROADS participants are given: to test out his climate policy ideas. En-ROADS is a non-partisan, policy-neutral tool, co-developed with the think-and-do tank, Climate Interactive. It isn’t used to lecture participants on what they should or should not do about climate change; rather it allows them to explore how their chosen solutions would play out on a global scale. Not exactly your run-of-the-mill slideshow.

“I thought the interactive dynamic of En-ROADS was very engaging and it was really unique. I had never experienced anything quite like it,” remarked Mayor Weinberger, after his initial experience with the simulator. This first experience would soon lead to many others.

Mayor Weinberger was so impressed by En-ROADS that he began to explore the free, online tool on his own. Then, he tested it out on a rather important constituency: his own parents.

“I happened to see my parents a couple days afterwards and walked them through it,” Weinberger shared. “I could tell that, of all of conversations we’ve had about climate change, this connected with them in a different way.”

The mayor said he can “draw a straight line” between that demo for his parents and their subsequent decision to move forward with some investments in solar panels and cold-climate heat pumps. He laughed while admitting they were “a small sample size,” but their reaction was compelling: En-ROADS could impact decisions at the household level as well as the city.

Taking it to the People

On the path to Net Zero, Mayor Weinberger is dedicated to engaging Burlingtonians through outreach and education, so he asked Professor Sterman to run the workshop once more: this time at a Town Hall meeting with his constituents. It was deemed a success.

“It was notable to me how En-ROADS just allowed a different type of conversation about what actions really matter and what actions don’t—at least when it comes to the climate,” remarked the mayor. “Climate is such an important issue. A lot of stakeholder groups latch onto it to forward the agenda they’re committed to. I really appreciated how the model debunks the magnitude of impact you can have from certain strategies.”

The mission of the MIT Sloan Sustainability Initiative’s Climate Pathways Project is to leverage our research and interactive simulations to advance the adoption of evidence-based climate policy through top decision-makers in the public and private sector. This means looking for  specific ways that our work might be shaping the knowledge, attitudes, and behaviors of people like Mayor Weinberger. For him, the biggest impact may have come from seeing some of his existing knowledge in a whole new light.

“It wasn’t until seeing the En-ROADS simulator that I really understood the urgency of climate action in the short term and how interventions made sooner rather than later have a compounding impact,” said Weinberger. “I hadn’t fully grasped that until seeing it at work in the model.”

As a former real estate developer, Weinberger says he has always thought a lot about the time-value of money: a dollar today is worth more than a dollar in the future, because you can invest that dollar today and earn interest. Now, he’s seeing that there is a time-value to greenhouse emissions, too. Emissions cuts today are worth more than those same cuts down the road and more than offsets that aren’t immediate. 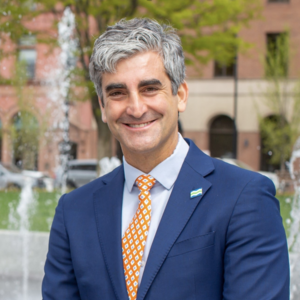 It wasn’t until seeing the En-ROADS simulator that I fully understood why short-term climate action is so important, and how interventions made sooner rather than later have a compounding impact. I hadn’t fully grasped that until seeing it at work in the model.

Plans for the Future

The best compliment an En-ROADS Climate Workshop can receive is another En-ROADS Climate Workshop—when a leader makes an introduction to others they believe can benefit from the experience. Recently, Mayor Weinberger connected the Climate Pathways Project with The Mayors Innovation Project and Rewiring America.  He has also expressed support for having En-ROADS curriculum in Burlington classrooms. Though the school district is separate from the municipality, Weinberger said there is an opportunity to build on some existing projects.

“It would be exciting if some Burlington teachers got jazzed about the model and used it in their lessons,” remarked Weinberger. “We’ve got this ambitious goal of being Net Zero by 2030. We aren’t going to get anywhere near that without broad community buy-in. I do think that working with the schools is one way to build that.”

The mayor has also expressed interest in some of MIT’s research that directly relates to the actions simulated in the model. Using En-ROADS to make connections between decision-makers and MIT experts is an important part of the work of the Climate Pathways Project, and the mayor sees this as part of an on-going partnership.

At the end of the day, En-ROADS is a global model. This might lead city and town officials to wonder about its usefulness at the municipal level. For them, Mayor Weinberger has some words of wisdom:

I think you can extrapolate, from the En-ROADS global model, what strategies really work.

“I think you can extrapolate, from the En-ROADS global model, what strategies really work. Many of the most impactful strategies are in areas where municipalities can make a difference. I think that the model really shows where you should be putting your effort.”

Mayor Weinberger also went on to reinforce the overall importance of municipal-level climate action at this time:

“Local government action that keeps us moving towards climate goals is disproportionately important right now. Ultimately, success at the local level may very well play a positive role in changing the national debate.”

See below to learn more about the City of Burlington’s Net Zero Energy Road Map, or click here. Members of the MIT Climate Pathways Project team are available to conduct remote or in-person En-ROADS Climate workshops. For more information or to schedule a session, click here.